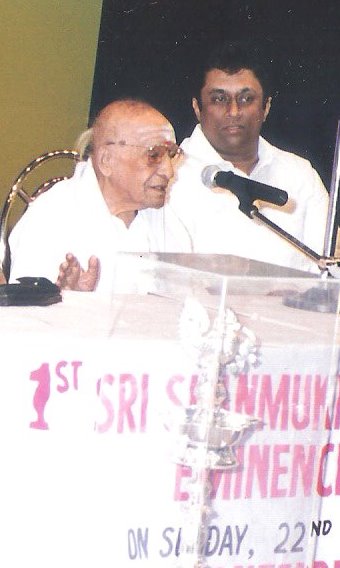 Today is the birth centenary of Semmangudi Srinivasa Iyer, in my opinion, one of the most influential of all carnatic musicians in the 20th century. I use the term influential mainly because that is what I can remember. His influence through his singing, his teaching, his professional life, his wit, his stage presence, his wisdom etc etc etc. A complete and thorough run through of his life would give innumerable pointers to musicians like me to follow and emulate. After all what more can be more influential than making people of his ilk follow him!

His music has been analysed threadbare and so has his life and career by many many people. This will continue for a long time to come and so I am not going to add anything of great value except my own personal views. In the early eighties I was such a rabid GNB fan that Semmangudi was enemy no 1 in my list! My grandfather Tyagu was a huge Semmangudi fan and periodically admonished me for holding such a view. But then that view was partly mine becaue of some of the stories that Tyagu himself had narrated! Which is of course another issue. It all started changing in the late eighties and musical company friends widened out of my immediate family. One main guy to make change my opinion was KR Subramaniam, flautist, disciple of N Ramani and a very close friend of mine. He was a huge Semmangudi buff and had a great collection of tapes. His access to GNB tapes was much less and so began a process of exchanges that made the way for both of us to enrich ourselves.

The first tape that he gave me was a concert with TNK and Pazhani, an old Academy concert with Kalyani RTP, and a slick Narayangowla ragamalika swaram. The alapana and tanam was an eye opener to me about this great musician. We came to the conclusion that Semmangudi’s music should not be judged with the recording of concerts after the mid seventies. Afterall the man was already 65+ by then! Sometime in 1988 I had gone to sing in the Sridhara Ayyaval Utsavam in Tiruvisainallur. This was a very very important festival and many great musicians had made their mark there. It also happened to be the native place of my great grandmother and I continue to go there as often as I can. I did get a chance to sing there first only because of my lineage than my musical abilites 🙂 Anyway what I was coming to was that, after I finished singing a seventy year old man came up to me and asked me if I was Tyagu’s grandson. He then said that he and Tyagu were childhood buddies and the streets of Tiruvisainallur withessed heated arguments between the Maharajapuram and Semmangudi bands of rasikas, the former led by him and the latter by Tyagu! Many years later SSI himself once asked me if I had any roots with Tiruvisainallur and said that the Ayyaval utsavam was quite prestigious in his times and he particularly enjoyed the audience there.

I had the opportunity to meet up with the great man on many occasions but there are just two stories that I want to say today. My guru Shri KSK had told me that narayanagowla was a dying ragam and the only person who could still do justice was Semmangudi. He recalled an elaborate Shri Ramam that he had heard in a concert in Bangalore. Once when I was at SSI’s residence I casually remarked that I wanted to learn Shri ramam from him. He said no problems any time and we left it at that. It was January 1st 2000 and I ran into him at the Academy in the morning. He asked me if I was just threatening to learn that song from him or if I was serious at all! I immediately asked him if I could come then and followed him to his house. He taught me the whole song in about 45 minutes and it was most enlightening and inspiring. The man was already 92 but the energy, enthusiasm, power in his voice and the quickness to make any corrections of the silly mess ups that I was continuously making was remarkable! He even asked me why I did not bring a notebook with me to write down the lyrics not the notation mind you!! I went back home and came again a few days later to sing and show him if it was ok. He just smiled and went on talk about other issues.

The other longer story is the entire day I spent with him in December 2002, when I accompanied him to Mumbai. He was to receive the National Eminence award from the Shanmukhananda Award. It was the first time they had introduced this and it carried a one lakh cash award. I was also chosen to receive the Shanmukha Sangeetha Shiromani on that same day. A few months back, when I knew about this I asked SSI if he was going to Mumbai. He asked me what was the matter. I told him that he has going to get a lakh of rupees. He gave a mischievous smile and said that if that were so he has to go! I told him that I was also selected to go and he he was immediately thrilled and told me that I had to escort him. That plane journey and the day I spent there with him was most memorable and some of the stories are better narrated in a podcast that I’ll probably do soon. But there were two things that were significant in that trip. One was his power of observation, the moment we left the Mumbai airport and entered Dharavi, he recognised the place and asked me if it was the same. Secondly after the function, he called me and asked me if what they had given was a cheque or a draft. He said “If it is a cheque we have to lose bank charges!”