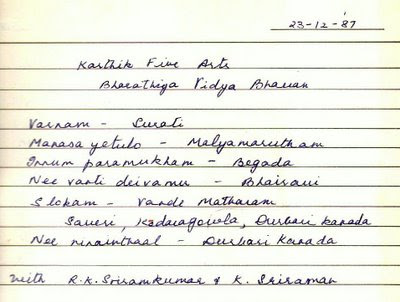 1987 was the first year when I sang in the formal music season in December. Kalarasna and Karthik Fine Arts were the two sabhas that gave me a chance to perform in the season. These thoughts went through my my mind as I sang my annual Karthik Fine Arts concert at the Narada Gana sabha last week. Karthik Fine Arts used to have their concerts in Bharatiya Vidya Bhavan, especially the junior slots. Once they started organising the main slots at the Narada gana Sabha, it was the goal for most of us to move there. KFA also was the sabha with multiple venues. At one point they had concerts at Narada Gana sabha, Bharatiya Vidya Bhavan, RR Sabha, a solitary KJ Yesudas concert at the Kamaraj Hall and their Tamizh Isai festival at the Valliammal college in Anna nagar. KFA was also one of the first organisations to honour younger musicians with their Isai Peroli title. The sabha has been growing from strength to strength spurred by their dynamic secretary Shri Rajagopal and a dedicated team he has built up. Shri Rajagopal was one of the pioneers of the Mylapore Fine Arts before he moved out and got involved with KFA. Rajagopal’s team also has a number of sabha veterans who have been active in this unique culture that promoted music, dance and theatre in Chennai and revolutionised the way Chennai developed into the cultural capital of India.

I have had a very personal relationship with the sabha for over twenty years. Much before that, my father, a member of Cho Ramswamy’s drama trouple had very close friends in the sabha and this was responsible for me even getting a chance in 1987. To this day, after every concert several members will come up to me after the concert and casually mention that they met my father at the concert and that they share a long time relationship with him. Many years back, I had decided to take a break in the season and sing in only the Music Academy because I was preparing for my ACS exams, which i never wrote! My dad actually chastised me for that and said that I should have sung atleast in Karthik Fine Arts!

I used to have a small notebook where I wrote down song lists for my first 15 or 20 concerts before I got bored of it. One of the several times I had begun and stopped this exercise. Anyway here is an image of the KFA songlist for 1987.

Photos of the Kartik Fine Arts concert by Sriram Guruswamy