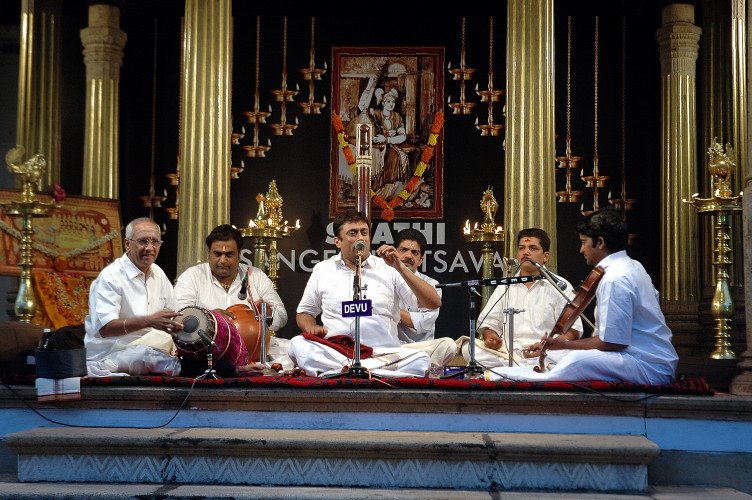 Kalayami raghuramam is a composition of Swati Tirunal in the ragam Begada and set to Misra Chapu. I first heard this song in a GNB recording of his 1964 Music academy concert. For many years that Begada alapana for me was the very definition of the ragam and I used it as a template for my practice. The first time I heard that concert recording must have been sometime in 1980 or 81. There were only two things that I remember from that first listening. My dad told me that it was GNB’s last concert at the Music Academy. He also said that the first three or four phrases of the alapana were to be heard, savored and memorised because they were so perfectly rendered and symbolised the essence of Begada.

Many years later I had just sung a concert in which I sang Ragasudharasa in Andolika. My guru who had come to the concert told me the next day, that though I gave a decent account of Andolika, he thought that the raga had been done to death. If I wanted to take a leaf out of GNB’s book, I’d be better off singing something like Kalayami in Begada!

Later in 2004 I was on tour in the US and Shri Mannargudi Easwaran who was accompanying me asked if I knew Kalayami in Begada. He even asked me to learn it and sing it sometime. I had completely forgotten about that incident. A week back I was just thinking of the songs that I could sing at the Kuthiramalika in trivandrum and thought I should sing Kalayami. It is a song I have heard many times and it should not be difficult to learn up the song quickly and would be a change from the otherwise usual stuff. I met Varadarajan, who was to accompany me in Trivandrum, a couple of days back and told him that I was planning to sing Kalayami in Trivandrum. He immediately said “Easwaran sir will be very happy!” Of course Shri Easwaran was supposed to play for me and I thought maybe it was becasue he had requested it some years back.

Yesterday at the concert in Trivandrum, as soon as Varadarajan finished his turn of the Begada alapana, I started Kalayami. Shri Easwaran got so excited that he shook his head, uttered a loud “sabhash” and immediately leaned over and patted me on the thigh, before beginning to play. After the song finished he called me aside and said “janma sapalyam” or words to that effect. Later that evening when we were having dinner he told me he heard that song for the first time in 1964 sung by GNB at the Music academy. Ever since he has been wanting to play for that song and never got an opportunity. Inspite of having played so many concerts for artistes of the GNB school like S Kalyanaraman, ML Vasantakumari and Trichur Ramachandran, he had never played for this particular song. He then recalled how he had asked me some years back and was so happy that I sang it!

It is interesting how certain songs have that effect on people. For me it was that Begada alapana form that same cocnert wheile it was that song for Shri Easwaran. I would have heard that alapana atleast a 1000 times in the last 25 years or so! And poor Easwaran sir would have been dreaming about that song every time someone sang ana alapana of Begada. Anyway this morning as I was chatting with Shri Rama Verma beforing getting back to Chennai, we discussed the Kalayami incident and how Easwaran sir got so excited. He said that as soon as I started Kalayami, he had leaned over to his father and whispered “It is GNB’s birthday today!” The icing on the Kalayami cake finally came from Shri Rama Verma’s mother who said, “According to my grandmother Maharani Sethu Parvati Bayi, GNB was the best exponent of Begada and I beieve he flirted with the ragam!”