Memories from the eighties

Memories from the eighties

The Tamil Nadu Iyal Isai Nataka Mandram had a great scheme for promotion of talent in music, dance etc. One generally applied as individuals and then they put you together as a team of 3/4 artistes and got you to perform at 4 different venues in Tamil Nadu, one of which was Chennai. It was in 1987 that I applied for an audition and got selected to perform at the 4 venues. Basically this is how the scheme operated. Sabhas all over the state would register with the IINM and they would be allotted artistes to perform there. The payment was fixed by the IINM and the sabhas got a grant also from the IINM but I am not sure about that. anyway as a main artiste I was paid Rs 225 per concert. Anyway for a budding 19 year old it was the experience of travelling and perform at varied locations that was most interesting and educative.

As soon as my letter arrived I found that my accompanists would be TS Seshadri – Violin and Kovai G Prakash – Mrudangam. TS Seshadri, at present is a music teacher at the Rishi valley school but back then he had just finished from the Madras Music college and was playing concerts and free lancing and teaching. As a sidelight, I was going through a phase in 1982, when my violin teacher Shri V Lakshminarayana had moved to the US. I was to continue lessons with Tirupparkadal Veeraraghavan but that never materialised. I did have a couple of lessons with Kanyakumari but I could not live up to mother’s condition that I had practice everyday if I wanted to continue learning from her! Meanwhile Ghatam artiste Umayalpuram narayanswamy was our neighbour. Once when Shri Parur MS Anantharaman visited his house, he called me to come and play for him. Shri Anantharaman chided me for not continuing on the violin and asked his student TS Seshadri to come and teach me. These classes continued for a few months and stopped.

Anyway coming back to the original story I managed to reconnect with Seshadri for these IINM concerts again. The first concert was to be at Gobichettipalayam. I got  letter from the organisers about the dates etc. The mrudangist Prakash, who is now a staff artiste at AIR Coimbatore, also wrote to me and confirmed the dates etc. COnsidering the speed at which communications happen today, I wonder how we survived writing and posting letters then!  the acceptance letter I wrote back must have been the first official letter that I ever wrote in tamil apart from the letter writing question that I attempted in my Tenth std public exam! Seshadri and me promptly landed in Erode and took a bus to Gobichettipalayam. The stay was at the “mappillai’s” room at a kalyana chattiram where the concert was to be held. Seshadri also warned me that any number above 10 in the audience could be a new record for the sabha! 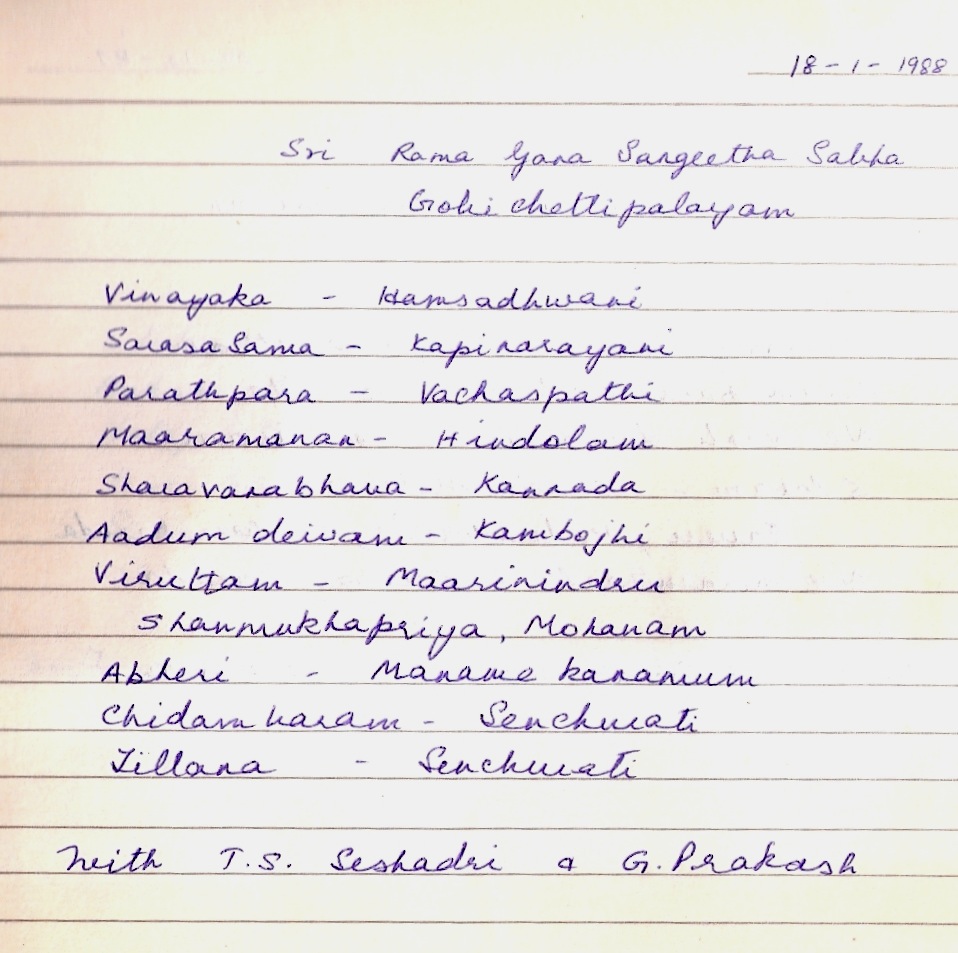 We had a whole day to kill and promptly decided to see a film. Seshadri also told me that there would be morning shows in these parts at about 10.00 am and we landed at nearby theatre to see “Michael raj.” The film starred Raghuvaran as the hero and the “dusky” Madhuri as the heroine! Later in the afternoon Prakash joined us from Coimbatore and we had a rollicking time discussing GNB and Prakash generally mimicking the top mrudangists of the day as we practiced in teh room. As expected the audience was 9 in number but I managed a 2 hour concert and left back home after pocketing my 225 rupees. 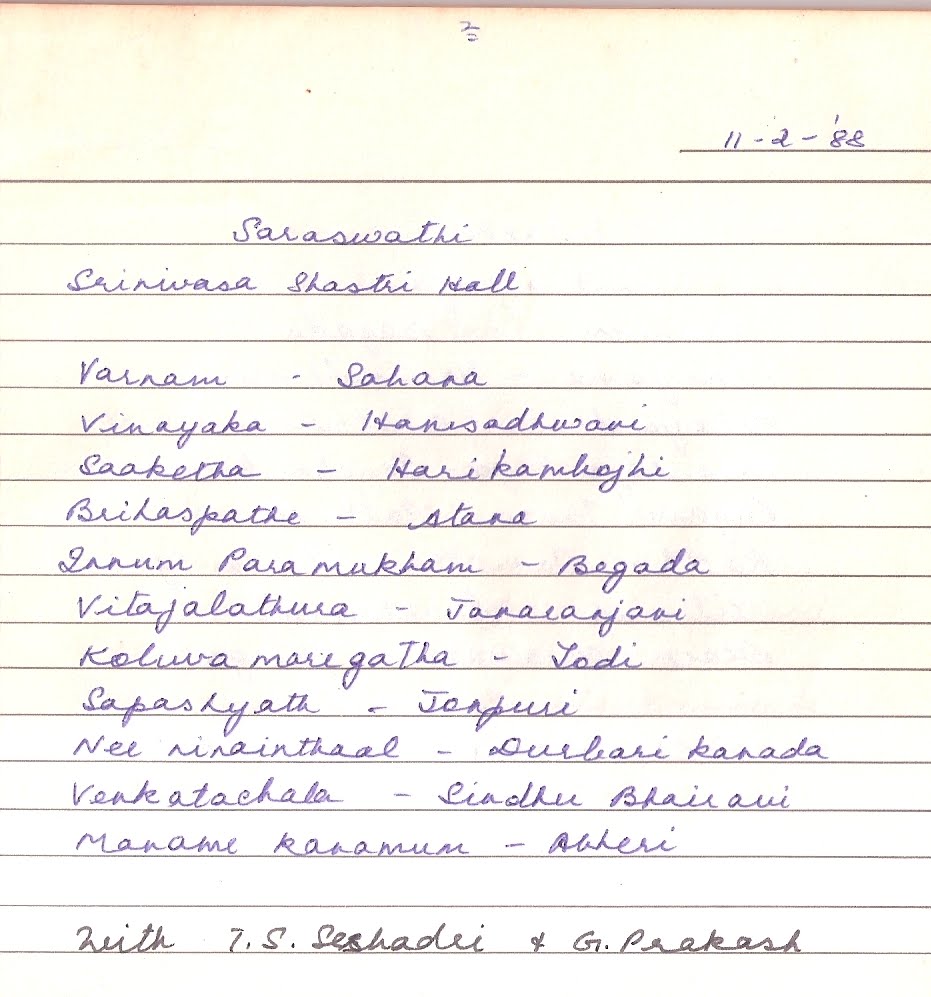 The next concert was in Chennai and at the Sastri Hall for the Saraswati Vaggeyakara Trust. Being one of my early “Mylapore” concerts I had decided on a “heavy” menu with Atana, Begada and Todi. As I began Todi alapana, in walked Hariprasad Chaurasia and Anindo Chatterjee!! My cousin Sharada, who was organising Hariji’s concert for Spic Macay brought him straight to Sastri Hall. The great man was gracious enough to stay till the end and bless me. After all that the secretary Shri NVS came up to me and said “I expect more Dharmavati/Hemavati” from you! Here I was growing up in the “heavy” atmosphere of Begada/Sahana/Surati etc and someone coming up to me and suggesting such “mere” scales??!!?? Anyway it was only a question of time before I was moving on with exploring more ragas and singing more of these “mere” scales!

Next in the circuit was to be at the Tamil Isai Sangam in Tiruvayyaru. We also had the RR Sabha in Trichy on the agenda, so Prakash managed to write to the organisers and ensured that we had back to back concerts so that we could save the train fare etc. I landed in Tiruvayyaru after receiving a “shock” letter that said that the concert was to be of only Tamil songs! Imagine my first concert at Tiruvayyaru and I cannot sing Tyagaraja kritis! Of course it did not matter that much since I was comfortable singing Tamil songs always. At Tiruvayyaru I also met nadaswaram artiste Vyasarpadi Kodandaraman who was there with his elder brother E Uthirakumar, who played together with another brother E Haridas as the Tiruppulivanam brothers. Kodandaraman had also won the AIR competition the year I won in 1986 and we knew each other. Uthirakumar promptly started singing in teh room and asked me to sing Huseni! As I was struggling he quietly said ” Sa pa sa vecchu paadunga!” Just keep singing sa pa sa and automatially Huseni will come through! The concert that evening was at the Panchanatheeswarar temple and the crowd was decent.

The next day we performed at Trichy at the RR sabha. A moderate crowd but we had already given a ‘bigger’ status to this concert and the menu had to include an RTP as well. As I was getting into the main item in walked P Unnikrishnan. He had just finished performing at Karur the previous day and was spending the day in Trichy. I cancelled my return ticket that night, spent the post concert with Unni and we came back the next day by bus.

These are the song lists from my old diary that I still have with me!