It is December and music season time in Chennai. This year I have chosen Divya prabandham as my theme for the Jaya TV Margazhi Maha Utsavam. I actually have two reasons for choosing this theme. One is of course the persistence of Maximum Media’s dynamic Subhasree Tanikachalam, the prime mover of the Margazhi Maha Utsavam. For the last few years she has been repeatedly asking me to sing on this theme. The other reason for me came when I listened to a programme of Divya prabandha isai by Isai Perarignar Late Kanchipuram MN Venkatavaradhan. Shri Venkatavaradhan was one of the stalwarts of Divya prabandha isai and has set to music hundreds of pasurams and sung them with so much verve and passion even well into his eighties. 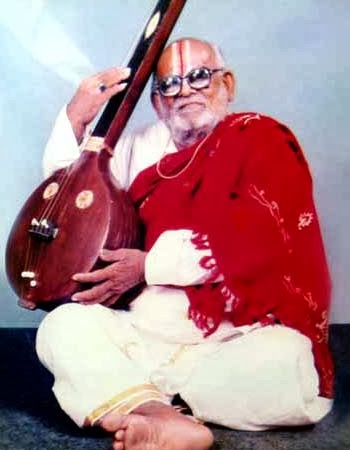 In 2001 Shri Venkatavaradhan was awarded the title of Isai Perarignar by the Tamizh Isai Sangam, Chennai. In his acceptance speech he gives the following details. “I was born in Enaatthoor near Kanchipuram. I was studying 8th standard in a Christian mission school when my father expressed the wish that I should start learning Divya prabandham. I learnt for 5 years under the laya wizard Kanchipuram Naina Pillai and 4 years from his son Rathnasamy. Later I learnt for 6 years from his disciple Shri NS Krishnaswamy Iyengar. People generally know Kanchipuram Venkatavaradhan as a singer of Divya prabandham. This is true but I have also learnt the 4 Thirumurais, Thiruvasagam, other beautiful and meaningful Tamizh compositions and Thiruppugazh and sung them in my concerts.”
After I had decided on the current theme a very good friend of mine Yessel Narasimhan managed to source for me the written notations of several Azhwar pasurams as tuned by Shri Venkatavaradhan. Going through them and learning a few to sing in this concert I am stunned by the musical and aesthetic value of his contribution to Divya prabandha isai. The songs have been set to music in mostly traditional ragams incorporating many of the conventional phrases and graces. One could also see a passionate soul at work in the way the sangathis have been introduced into the pasurams at the appropriate places keeping in mind the lyrical beauty and devotion of the Azhwars’ works. It is unfortunate that Shri Venkatavaradhan’s contribution went largely unnoticed and unrecognised by the mainstream Carnatic music world, but thankfully organisations like the Tamizh Isai Sangam gave him his due. I personally dedicate this concert to the memory of this great artiste.
Posted 9 years agoInUncategorizedMusiciansSeason
0 Facebook Twitter

Thank you for sharing this. There is so much more to music than what meets the ear.