It must have been 1985 when i first landed there for the Tyagaraja aradhana. Aradhanas world over are very similar. You have a pancharatnam and then everyone gets a chance to sing 1 or 2 Tyagaraja songs. Since I had learnt the violin I even accompanied some of the singers. Mrudangam artistes were always in abundance but violinists were a scarcity!

Have a close look at this foto below. It must be around 1985/86. I am singing with pants on, no electronic sruti box. and a manual tambura for singing just a couple of songs. Another thing is that I am wearing a watch! Something I stopped doing many many years back. It was a fashion statement for me to wear a watch and take it off after the second song. Apparently GNB used to do it! 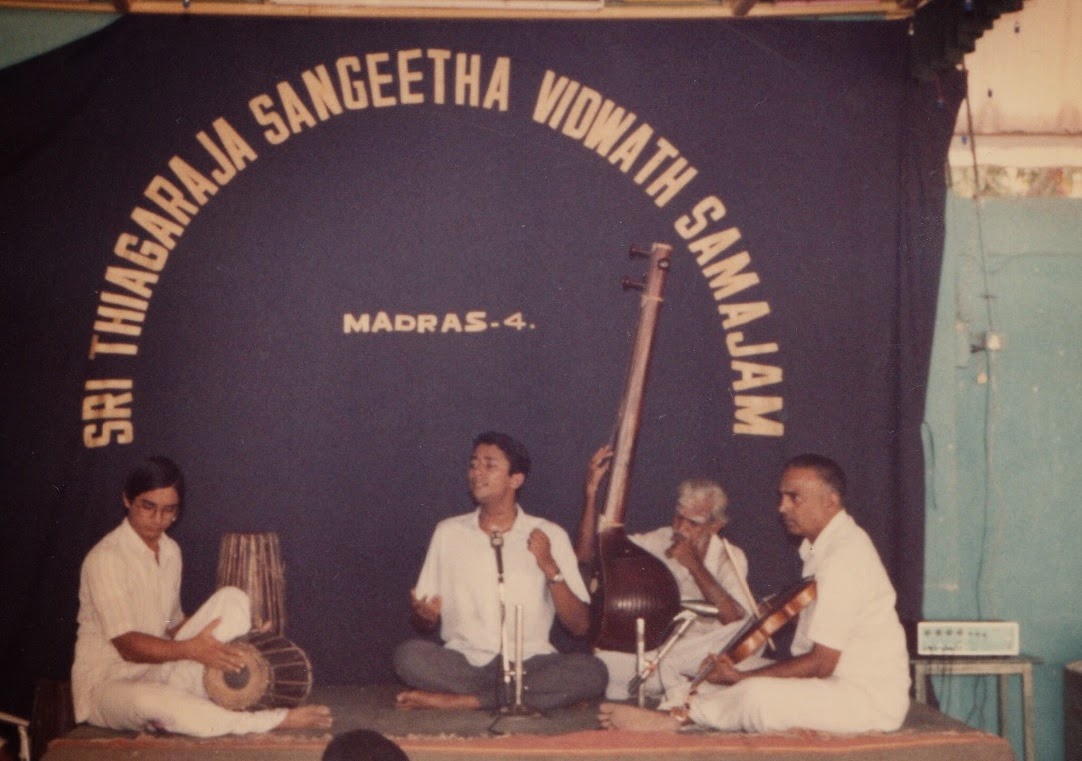 The Tyagaraja Sangeetha Vidwath Samajam in Mylapore brings bak so many memories  for me from the late seventies and early eighties. One of the first concerts I ever heard at that place was by KV Narayanaswamy . I think it was 1979 and there was a series to commemorate the Samajam’s golden jubilee. I can never forget his rendition of the Kalyani ata tala varnam that day.

The Samajam also had Tyagaraja akhanda ganam singing the bard’s songs for 24 hours continuously. It was great fun to go and spend the night waiting for a chance to sing. Sometimes there were akhandams at multiple venues. One year we went to the samajam finished singing at around 1 am. Then drove all the way to Purasaivakkam where another akhandam was taking place. We landed there when TK Govinda rao just started ‘Vidhi sankradulu” in Yamunakalyani before asking the person noting the songs whether it had already been sung. There was a mischievous twinkle in his eye as I am sure he knew no one would have sung it before! They never repeated songs in the akhandams you see.

Some of the stalwarts who were regulars at the akhandams were Maruthuvakkudi Rajagopala Iyer of the Umayalpuram sishya parampara. Known as Mylapore Gopu, he had taught many in our  family including my grand aunt Rukmini Rajagopalan and my mother and several of my aunts. The story was that many leading musicians approached him for rare Tyagaraja songs. Once one of my aunts wanted to learn a song that GNB had sung and asked Gopu sir if he could teach it with the GNB sangatis! The man was livid and shouted “These fellows (GNB) learn these songs from me, change all the sangatis and now you people want me to teach his sangatis!”

Artistes like Chingleput Ranganathan, Veena Ravindran (he once sang a lovely kadalE vAdu in narAyaNagowla), Sirgazhi Jayaraman, Pattamadai Krishnan and others would also sing during these akhandams. The samajam once organised a similar Dikshitar akhandam for the first time. I had learnt close to about 50-60 Diskhitar songs at that time and I stayed up the whole night singing whenever asked to. The one who really propped the akhandam completely that year was Dr N Ramanathan of the Madras University who led a group of students.

Mannargudi Sambasiva Bhagavatar was the man who ran the samajam tightly and passionately. He gave a lovely vocal concert once that I heard where he sang the famous ‘cakkaga nee bhajana’ pallavi in Sankarabharanam. I had heard of him as a harikatha artiste and it was a pleasant surprise to hear him sing a full fledged concert. Sirgazhi Jayaraman who gave the vote of thanks that day remarked that Bhagavatar was a disciple of Maharajapuram Viswanatha Iyer.

One of the most memorable concerts there was the famous Semmangudi concert with Dr M Balamuralikrishna on the viola, TK Moorthy on the mrudangam and G Harishankar on the khanjira. The above video is from that concert where you can see some of us in the audience. I went upto Dr MBK after the concert to express my appreciation and he quietly said “I hardly touch the instrument!”