1987 was my first music season and Kalarasna gave me a chance back then when they still had a slot in the afternoon for junior and upcoming artistes. The image below is a scan from a note book I maintained in the first few years of my singing career. Enduko nee manasu in Kalyani was a particular favourite of mine that I had learnt from my grand aunt Smt Rukmini Rajagopalan. AGA Gnanasundaram who had played violin for me was a disciple of Lalgudi Jayaraman. Many years later I was happy to run into him in Melbourne, Australia and he remembered a trip we had all made as part of a Spic Macay tour, where I was the junior artiste and Lalgudi sir himself was the main performer. 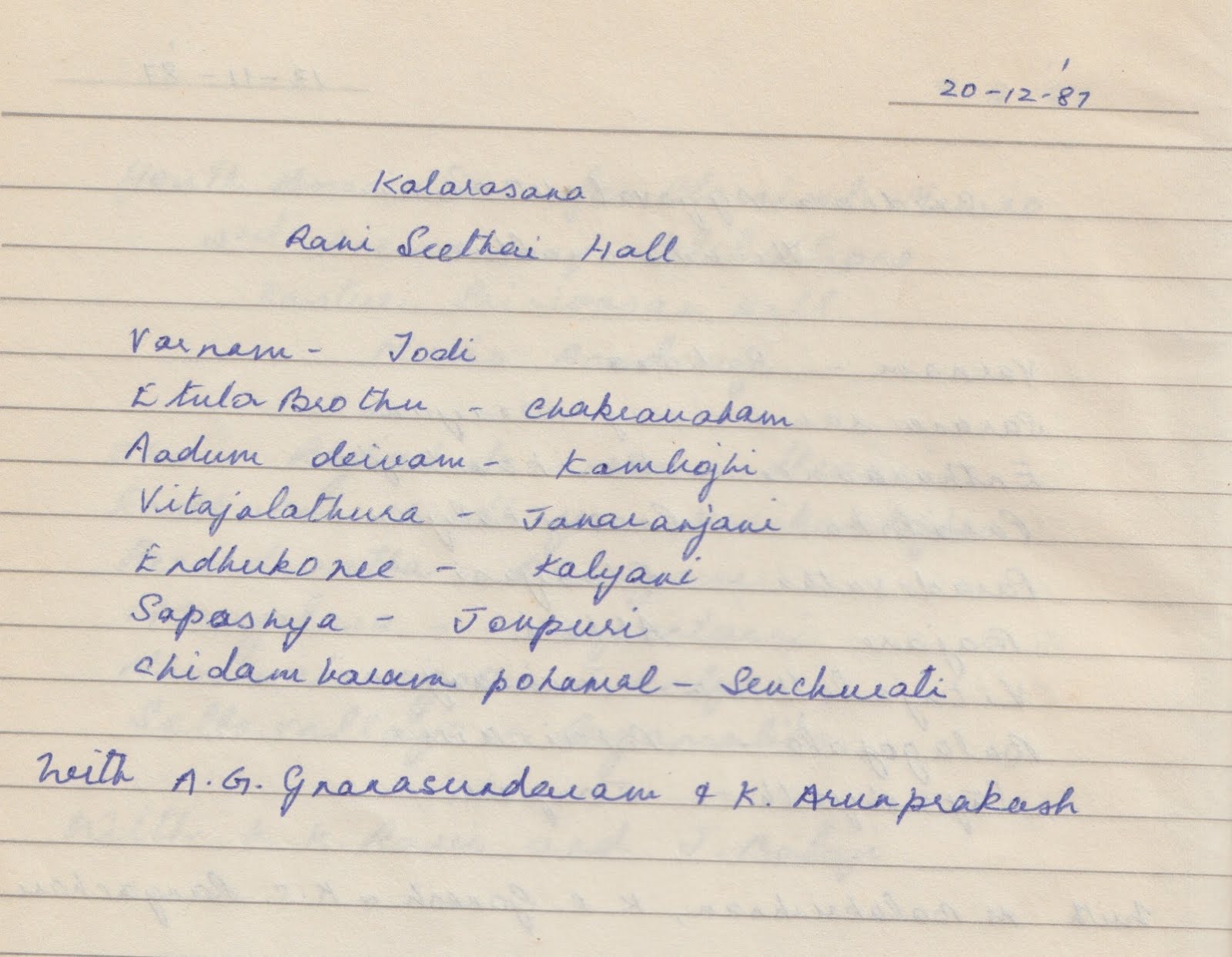 Kalarasna was a big player in the early eighties Music season landscape. They had a programme of just one concert a day, open ended allowing the artiste to sing for as long as he or she wanted. They did experiment with a junior slot for some years but it was not continued. December 31st was usually reserved for TV Sankaranarayanan and he sang with some fantastic accompanying artistes. One particular concert was with Lalgudi Jayaraman, Karakkudi Mani and G Harishankar. A terrific concert and TVS held his own with this formidable team leading my uncle who was with me to exclaim “this is like watching Viv Richards bat against Lillee and Thomson!” Kalarasna also had a wonderful function billed as the “Grand Finale” for Karaikkudi Mani’s Sruti Laya Ensemble. A programme which had people like Dr S Balachander participating and the brilliant Harishankar playing a spectacular round ending with a stunning  korvai like Kapil Dev hitting 4 sixes in a row to save the follow on with the number 11 Hirwani at the other end!

Personally for me Kalarasna has been a favoured venue. A number of friends including some close family members specifically tell me that they like the concerts here. One of the concerts that I can never forget was with S Varadarajan and Palghat Raghu. Raghu sir had specifically asked me to sing a pallavi in 4 kalai and I was singing it in Todi that day. I was just approaching the upper shadjam during my raga alapana when the power went off. Pitch dark, but the acoustics were so good and my voice was in good shape to exploit the upper octave. After the concert it was just those 4 minutes of mike less Todi raga that people remembered and recalled the most!

Fast forward to 2012 and many things have changed. For one the festival moved from its traditional venue of Rani Seethai Hall to the Chinmaya Heritage Centre in Chetpet. Kalarasna has dispensed with the junior slots and the evening concerts are open ended with no time limit. A lot of people love listening to concerts at Kalarasna for this very reason. In the early eighties the sabha did a lot for Tamizh theatre and the plays of Crazy Mohan and SV Sekar were huge hits running to packed audiences. Nowadays the sabha mainly concentrates on its annual music festival in December. Mr Srinivasan the moving force behind the sabha, is a personal friend and one of the rare breed of sabha secretaries from the seventies. You may not find them inside the hall listening to the music, but they build wonderful relationships with the artistes and are selfless in their pursuit of promotion of arts and culture with a missionary zeal. He is probably the only secretary who gave me an extra payment after a concert because there was a good gate collection that evening! I do hear that the festival this year might be moving back to the Rani Seethai hall because of traffic disruptions on Harrington Road on account of the Metro work going on in the city. I was rather beginning to like this new venue and am not sure how Rani Seethai hall is now after its recent renovation. It shouldn’t really matter because Kalarasna will retain its character wherever it conducts its festival.