Short Notes just completed 50 episodes! When we conceived this idea and recorded the first few episodes, I never thought I’d do this for as long as I did. What started as a small playful venture blossomed into a weekly dose of swara bytes with #rajaisgod dominating my social media landscape. The response has been unbelievable from everyone and the crowning moment was when the great man himself (Isaignani Ilayaraja) pointed it out in public!

The evolution of Short Notes to it’s current form is by itself a long story. So sit back and join me as I try and bring this to you over a few instalments (I promise they will be larger than byte sized!)

I hardly had exposure to film music in my house. No one played Vividh Bharati on the radio. The moment film songs started after the mandatory Isai Arangam every morning on the Madras A channel of All India Radio, it would be muted. Of course there would be the odd days when we had the house to ourselves and we could quietly turn on film music. I am talking about the period of 1974-75 to about 1982-83. We did not have a record player in our house, no television and only radio.

My knowledge of the popular songs of that time was always from my class mates in school. I studied in St Bede’s in Madras, and the boys knew all the songs even as the films were released. I also had a couple of aunts who would encourage me to listen to film music when I visited them and peer pressure and the fear of losing out to your friends forced one to keep up with the trendy songs of the time.

Of course at that time, we were blessed with some of the best music that was composed for cinema. Ilayaraja was king and we were his loyal subjects! In 1982 there was a special Ilayaraja Live show that happened at the University Centenary Auditorium for the Platinum Jubilee Celebration of my school. We had such a ball that night jumping, cheering, singing along as the ‘man’ and his orchestra played on and on.

In 1986 I started performing concerts. My focus shifted to the classical genre and I never did get back to film music. I did keep up for a few more years till the early nineties and then I kind of switched off. Now those of you who have been following Short Notes will know where this heading. Yes this is the reason why you will find less references to songs from the late- nineties and later. 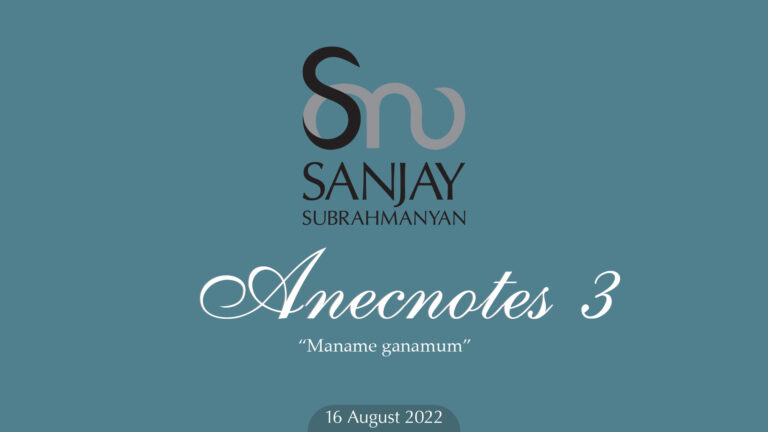